Nitrogen is essential to nearly every aspect of plant growth, but it is one of the most difficult nutrients to manage. When plant available N exceeds crop demand, nitrate (NO3) accumulates in soil, increasing the risk of N loss to the environment. Excessive levels of available N can also produce succulent plants that are more susceptible to environmental stress and pest pressure. When plant-available N is too low, crop health and productivity suffer. Understanding of the forms of N in the soil and the factors that influence them will help improve management of this dynamic nutrient.

Practical knowledge of the N cycle is key to effective and efficient N management. The N cycle is extremely dynamic and its behavior in soil is complex. Nitrogen transformations and losses are affected by the form of N added, soil characteristics and conditions, and the vagaries of the weather. The rate and magnitude of N transformations and losses are difficult to accurately predict. 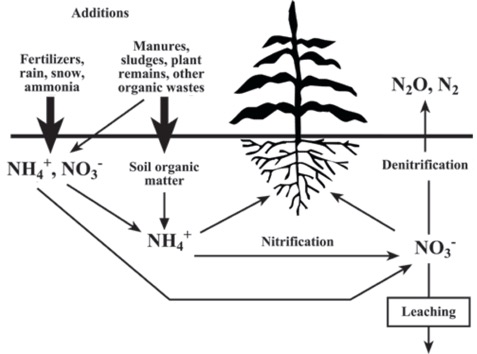 As shown in Figure 1, there are two forms of the N used by plants: ammonium (NH4) and nitrate (NO3). In addition to commercial fertilizer sources, plant-available N in the soil may increase through mineralization (the microbial conversion of organic N to ammonium and then nitrate) of soil organic matter, manure and other organic residuals. See also Fertilizers and Soil Amendments.

The amount of total organic matter N that becomes available to plants in any one year, is relatively small as a percentage of the total organic matter. For most soils, 2%-4% of the total organic matter N is mineralized, or converted to forms plants can use, annually. This is roughly equivalent to 20-40 lb of available N per acre for each 1% of organic matter in the surface 6 inches of soil. This mineralization is not constant throughout the growing season, however. A flush of available N is normally mineralized in late spring with lower rates of mineralization occurring during the growing season. Moisture conditions will greatly influence mineralization, with the highest rates when the soil is well-aerated and near water holding capacity. Small flushes of N will be released when dry soils are re-wetted during the season. The rate of mineralization is dependent on the activity of microbes, especially bacteria. Such activity is favored by warm, well-aerated soils with adequate, but not excessive, moisture and a pH above 6.0. These conditions are also favorable for the growth of most vegetables. Excessively wet conditions can greatly limit bacterial activity, and therefore N mineralization. For these reasons, the N contribution of mineralizing soil organic matter is frequently estimated at a conservative rate of 10 lb of available N per acre for each 1% of organic matter in the top 6 inches of soil.

Nitrogen found in manures and other waste products is discussed extensively in Fertilizers and Soil Amendments.

Previous crops: Many vegetables leave little residue in the field and thus they provide little N benefit to subsequent crops. However, previous forage or cover crops can supply large amounts of N to succeeding crops. Legumes, such as alfalfa and red clover, can furnish 100 lb or more of N to crops that follow (Table 1). Other legumes, mixed grass-legume stands and grass sods supply less N to succeeding crops. Keep in mind that most of the N is in the leaves, not the roots. If a legume hay crop is harvested, most of the N is removed from the field along with the hay.

Nitrogen losses occur in several ways. The loss of available soil N not only costs growers money, it has the potential to negatively impact both air and water quality. Understanding the cause of N losses can help growers make management decisions to improve N use efficiency and minimize negative environmental impact.

Volatilization Losses: These losses occur mainly from surface applied manures and urea. The losses can be substantial; more than 30% of the N in topdressed urea can be volatilized if there is no rain or incorporation within two or three days of application. Losses are greatest on warm, breezy days. Volatilization losses tend to be greater from sandy soils and when pH values are above 7.0. Delaying the incorporation of manures after they are spread also leads to volatilization losses of N. Under the right conditions more than 50% of the ammonium N may be volatilized within the first 48 hours following surface application of manure without incorporation.

Not only does volatilization reduce the fertilizer value of manure and urea, it can degrade air and water quality. Ammonia in the atmosphere can form particulates that contribute to smog. Ammonia emissions can also contribute to eutrophication of surface waters via atmospheric deposition.

Leaching Losses: The nitrate form of N is especially mobile in soil and is prone to leaching losses. Leaching losses are greatest on permeable, well-drained to excessively-drained soils underlain by sands or sands and gravel when water percolates through the soil. Percolation rates are generally highest when the soil surface is not frozen and evapotranspiration rates are low. Thus, October, November, early December, late March and April are times percolation rates are highest and leaching potential is greatest. This is why nitrate remaining in the soil after the harvest of annual crops such as corn in September is particularly susceptible to leaching. The use of fall cover crops can take up this residual N and prevent it from leaching. The N will then be released for crop use after the cover crop is plowed down in the spring. Of course, leaching can occur any time there is sufficient rainfall or irrigation to saturate the soil. This is why it is important to attempt to match fertilizer N application rates with crop N needs.

Nitrate leaching accounts for the vast majority of N losses from cropland. Nitrate leaching can have a direct impact on water quality. When nitrate leaching contaminates groundwater serving drinking water supplies, human health can be impacted. The greatest concern is for infants; high levels of nitrate can be toxic to newborns, causing anoxia, also known as “blue-baby” syndrome. High nitrate levels in drinking water are also harmful to young or pregnant livestock. Depending on regional hydrology, leaching losses of nitrate can also contaminate surface waters.

Denitrification Losses: These losses occur when nitrate is converted to gases such as nitrous oxide (N2O) and nitrogen gas (N2). The conversions occur when the soil becomes saturated with water. Poorly drained soils are particularly susceptible to such losses. In especially wet years on some soils, more than half the fertilizer N applied can be lost through denitrification. The most favorable conditions for denitrification occur in early spring and late fall. Minimizing the concentration of nitrate in the soil during these periods by delaying N application in the spring and planting cover crops in the fall will help reduce denitrification losses.

Most of the N lost during denitrification is in the form of the inert nitrogen gas (N2) which has no negative impact on the environment (our atmosphere is approximately 78% N2). Only a small percentage of denitrified N is lost as nitrous oxide (N2O); however, it is a powerful greenhouse gas. The impact of 1 lb of nitrous oxide on atmospheric warming is over 300 times greater than 1 lb of carbon dioxide. Agricultural activities account for over 70% of nitrous oxide emissions in the US.

Immobilization: Immobilization occurs when soil microorganisms absorb plant-available forms of N. The N is not really lost from the soil because it is held in the bodies of the microorganisms. Eventually, this N will be converted back to plant-available forms. In the meantime, however, plants are deprived of this N, and N shortages in the plants may develop. Immobilization takes place when highly carbonaceous materials such as straw, sawdust or woodchips are incorporated into the soil. Manure with large amounts of bedding and compost with C:N ratios greater than 30:1 may cause some immobilization.

Crop Removal of Nitrogen: A significant quantity of N is removed from soil via crop harvest. For example, good sweet corn crops may remove over 150 lb N per acre annually. Anticipated crop removal of N is one of the factors used in making N fertilizer recommendations. Depending on the crop, variable amounts of the nitrogen taken up by the crop are returned to the soil after harvest in nonharvested plant parts. With sweet corn this can be as much as 100 lb N per acre. As these leaves and stalks decompose, the N is released into the soil for use by a subsequent crop. Cover crops can take up much of this N to prevent losses by leaching or denitrification.